When I look at the world around me, I find that I don’t have to look very far to see all sorts of evil and unnecessary suffering, and often it has driven me to ask “Why would God allow any of this?“

The first thing that needs to be addressed when we attempt to answer a painful question like this is the assumption that is driving the question. When we see evil, are we wondering whether God created it, whether He allows it, or whether He even has the power to stop it? So, in order to answer this question accurately we must first ask ourselves what it is that we are assuming about the reality of evil and how it relates to God’s sovereignty.

Often the inquiry about the existence of evil is this: If God is so good and sovereign, then why is it that He would allow so much evil to exist in the first place?

This inquiry is often motivated by a familiar assumption, one that even St. Augustine was puzzled by. It goes something like this:

Evil is a thing.

The logic of this thought sequence makes perfect sense, however the assumption itself is false. It’s false because it posits that ‘evil is something.’ I would argue that evil cannot be something, because it’s too preoccupied with being nothing at all. You see, evil is not something that was created, but instead it is the deprivation of something else: good. I’m not denying that evil exists, I am claiming that evil cannot exist by itself. Good exists, and it is from God. Evil exists, and it is the lack of good.

The Tree of The Knowledge of Good and Evil

To explain why it is that evil exists, it is necessary to go back to the beginning of creation, in the first chapters of Genesis. In Genesis 2 we are given a more in depth view of the sixth day of creation – the day God created mankind. On the day God created mankind He also gave the first commandment in Scripture: “You are free to eat from any tree in the garden;  but you must not eat from the tree of the knowledge of good and evil, for when you eat from it you will certainly die (Gen. 2:16-17).”

To love someone is to give them free will. God could not force Adam and Eve to love Him in the same way that we cannot force anyone to love us, or that anyone can force us to love them. It has to be a choice – it has to come from free will. This is what the tree symbolizes, and this is why God put it in the garden. He wanted them to have free will and to be able to willingly choose rather to love and obey Him or to turn and disobey. He did it out of love.

So, to answer the former question, God placed the tree of the knowledge of good and evil in the garden because He had to give mankind free will. Without free will God would have made Himself a tyrant, but God is not a tyrant. God loves us and He desires for us to love Him back, thus He has given us free will.

When God granted Adam and Eve free will He also gave them the ability of contrary choice, that is, the ability to choose what is contrary to God’s will. His will was for them to obey, however Adam and Eve were free to disobey.

In Genesis 3 we are introduced to what is commonly referred to as “The Fall.” The Fall is the point in time in which evil entered into the world.

Before this point in time, the Garden of Eden was pure paradise. For when God was finished with creation He said that “it was very good (Gen 1:31).” The Garden of Eden didn’t have any harmful plants; there were no “thorns or thistles,” there were no natural disasters, there were no predatory animals, for they all lived in harmony with Adam and Eve. There was no evil to be found. Adam and Eve were so innocent and void of corruption that they could not even perceive their own nakedness.

However, at the moment that Adam and Eve chose what was contrary to God’s will, and eat from the one tree that He had commanded them not to eat from, sin was made known. Sin was made known and evil entered into the world. The ground became cursed, harmful plants were made manifest, the ability to experience pain was introduced, and now we live in a fallen world where death exists.

As I’ve said earlier, evil was not created, but instead it entered into the world after the completion of creation, due to mankind’s sin.

So, “Why does God allow evil?”

God allows evil because mankind has chose to bring it into this world. The fallen world we know is the result of Adam and Eve’s decision to choose what was contrary to God’s will. God created paradise, whereas mankind summoned chaos.

However, despite our wickedness God has paved the way back to Him. He has sent Christ Jesus into the world to rescue, redeem, and restore what was broken in the fall of Adam and Eve: our relationship with Him. No one is without sin except the perfect Son of God, our Savior Jesus Christ. He has come down from heaven, taken on the flesh, and has sacrificed Himself to atone for our sins. It is only through Him that we can ever expect to find the paradise that we are all in search of. Jesus is “ the way and the truth and the life,” and no one can come to the Father except through Him. 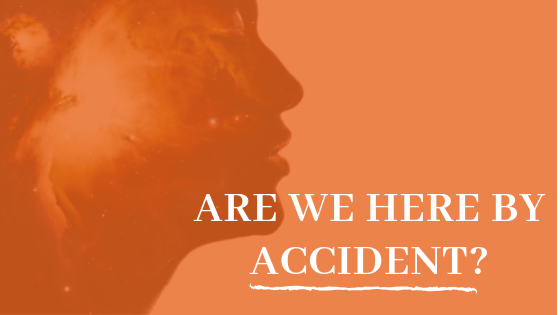 How many times do you think you would have to accidentally spill paint on a canvas in order to create the Mona Lisa?

We of course know it was no mere accident. But how many times do you think that would have to occur before, by pure accident, this famous masterpiece was created? A hundred-thousand? A million? A hundred-million? A billion? A trillion? Who really knows?

We would never even suppose that it were an accident. We look at that painting and we presume that it was created by a clearly talented painter.

Then why is it that when we perceive a two-dimensional object comprised of paint and canvas, it’s easy to assume intelligent design? But yet when we look at the infinite expanse of the cosmos and the infinitesimal infinite; atoms, quarks, neutrinos, etc., and all that’s in between: the vast diversity of plant and animal life, mankind, and how it all fits together – like a pocket watch, with all of its interdependent, coexisting parts working properly – we assume an accident?

And not to mention, in regards to the creation of the Mona Lisa, you would still have to explain how the paint and canvas got there, and who painted it.

If I haven’t yet made it clear, the answer is yes. I undoubtedly believe that the universe was created by a Creator. I do not believe that the universe and all of its concomitants are just the by-product of some sort of accidental, cosmic explosion. When I cast my presuppositions aside, I find that it is impossible to escape the fact that the creation was created with intelligent, precise design and purpose. The universe was, without a doubt, created through intent. But who created it?

“In the beginning God created the heavens and the earth.”

After 21,604 I’ve realized my passion isn’t with godspov.com anymore. But this is not the end.

I decided I would take a leap of faith, and stretch my ability to write into a larger sphere. So, I’ve made a new website!

For more info, go to fromdrew.com

This is not the end. It’s only the beginning.